Today we are going to talk about an organization that Defying Shadows likes to support in any way that they can: To Write Love on Her Arms.

To Write Love on Her Arms is a “non-profit movement dedicated to presenting hope and finding help for individuals struggling with depression, addiction, self-injury, and suicide. TWLOHA exists to encourage, inform, inspire, and to invest directly into treatment and recovery.”

To Write Love on Her Arms helps people struggling with depression, addiction, self-injury, and suicide. They give confidence to those who are hurting, educate the world on mental health, motivate individuals of all ages to make a difference and donate funds to treatment and recovery services. Their vision statement says that they believe the following, “You were created to love and be loved. You were meant to live life in relationship with others, to know and be known. You need to know your story is important, and you are part of a bigger story. You need to know your life matters.”

To Write Love on Her Arms comprehends the pain that thousands of people are in daily due to depression, addiction, and anxiety. They recognize that there is a way to get through this hard time with hope and help. They guide individuals to counseling, treatment, and a path to recovery. The founder of this association says on their website, “We want to say here that it’s worth it, your life is worth fighting for. It is possible to change. We’re seeing lives change as people get the help they need.” To Write Love on

Her Arms does not stop with treatment, they value community as well. They believe that people need other people to become well. Their vision includes the possibility that your best days are ahead, that you are loved, that hope is real, that you are not alone, and this is not the end of your story.

Helping struggling individuals is To Write Love on Her Arms’ mission, nevertheless they have a second part. They want to ensure that individuals are educated about mental health issues, and they share the knowledge and truth of mental health to show that this is a very widespread struggle, and you are not alone. The National Alliance on Mental Illness states that “two thirds of people with depression do not seek treatment.” To Write Love on Her Arms wants to see that number change and hope that enlightening individuals about depression, addiction, self-injury, suicide, and anxiety with open doors for those who are struggling to reach out and receive the help they deserve.

To Write Love on Her Arms began with a true story about a nineteen year old girl named Renée. This movement began in the spring of 2006, when the founder, Jamie Tworkowski wrote a story about Renée, who was suffering with depression, addiction, and self injury. Renée had a very low self- worth and carved her judgment of herself into her arm almost ten years ago. The title of this story was To Write Love on Her Arms which symbolizes a goal to believe that a better life is possible. A MySpace page was produced to share the story, and T-shirts were sold to assist with the payments for Renée’s treatment. As the days passed and the message was shared, it became clear that this story was not just about one person.

The initiator of To Write Love on Her Arms began to get messages from people besieged with depression, addiction and self-injury. They heard from individuals who are anguished from those they lost to these struggles who wanted to help. They began to recognize that these problems affect millions of people around the world, regardless of “age, race, gender, religious belief, orientation, and background.”

Over the years, this movement has become more than just a blog and a couple T-shirts. With the help of musician support, tours, and social media, the message has spread and reached an audience larger than Jamie and his start-up team ever expected. Today, To Write Love on Her Arms has moved from the computer screen to conferences, campuses, programs, and events all around the world, where they challenge the stereotypes that have surrounded health issues for so many years. They are investing time, resources, and funds to treatment and recovery by offering financial support to organizations, centers, and by volunteering to help walk individuals towards their healing.

Jamie Tworkowski started To Write Love on Her Arms with a story, as we discussed earlier. Jamie grew up surfing, and fell in love with music and writing as he matured. This movement began as he attempted to tell the story of a struggling friend in 2006, and this grew into a global movement. Now he spends his time sharing the message and mission behind To Write Love on Her Arms at college and high school campuses as well as festivals and conferences.

To Write Love on Her Arms is located from Melbourne, Florida; however, they are a worldwide movement. This group travels around the world doing conferences, and events to raise mental health awareness. As for a specific base, they are mostly online with their website, blog, social 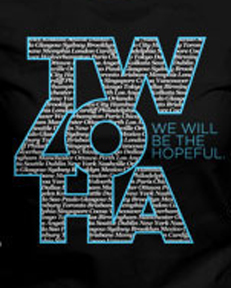 media, and their online store.

To Write Love on Her Arms travels around the United States and internationally for tours, festivals, conferences, and other events. They are constantly trying to cover more areas and share their message as much as possible. Being an American based organization, so To Write Love on Her Arms is more local within the United States, nevertheless, they are international and offer services based from both Toronto, and Vancouver. On their website they list several resources in these Canadian communities which are there to care for those struggling. This list is not exhaustive or exclusive, though it is a start to bridge the gap from helplessness to help. In addition, To Write Love on Her Arms has services listed for Australia, and the United Kingdom.

The general consensus is that To Write Love on Her Arms is a Christian organization, and only for people who follow this lifestyle. On the contrary, To Write Love on Her Arms is not a Christian association. There are individuals on staff who are Christians and even some Christian elements in the original story; however, this is a movement for all people. This is because “issues like addiction, depression, self-injury, and suicide affect everyone, [and] we are an organization for everyone, regardless of age, gender, sexual orientation, religion, race, ability, nationality, or other differences. As an organization, we aim to be inclusive and inviting for everyone.”