“For the month of May, Defying Shadows will be joining the Mental Health Awareness Month by sharing a post daily on a different type of Mental Illness or “Shadow” that people commonly struggle with. Join us in creating awareness and working to end the stigma that goes with these topics! Today we have Alex Newton sharing on Autism. ~ Defying Shadows Team.”

Autism is a developmental disability that affects how a person interacts with others and how they perceive the world around them. Like any other illness/disability, those with the same diagnosis and that have the same symptoms often affect each of them differently. Some of those with autism can live relatively independent – with minimal assistance – while others require a lifetime of specialized support.

Asperger’s Syndrome is a form of autism and usually have average or above average intelligence – they usually have fewer problems with speech but still have difficulties with processing and understanding language.

There are three main areas of difficulty with people who have autism, known as the ‘triad of impairment’:

Here are some facts, myths,and stats about Autism:

The most important note to remember is not to wait for a diagnosis, go see your doctor/specialist right away.

For more information, go to: http://www.autism.org.uk/ 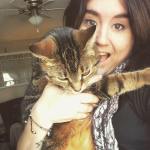