Hello! Happy Sunday to all! Today I’m going to be writing about online dating. I’ll be sharing some tips for safe online dating and some of my own thoughts about it. Disclaimer: before I begin this post, I should note that I am sans-boyfriend.

It’s 2015, the year of online dating. We’ve got so many online sites and apps available to us than ever before. It’s more than likely the highest rate it’s ever been (probably due to the extensive advancements made in the world of technology.) To be honest, I’m far too worried about being at a location that doesn’t free wifi (because who actually likes using their data?) And I believe a lot of people would agree with me on that. Online dating may seem so convenient (since it is so accessible – literally right at your fingertips), but ALWAYS take precautions if you decide it’s something you’d like to try out.

Have you ever heard of the term ‘catfish’? Yes, there is a series on MTV called “Catfish,” and yes, I have wached it (and it also breaks my heart.) Catfish is simply when someone online pretends to be someone they’re not (pardon the pun – but they’re essentially reeling someone in with false information – for who knows why.) The last episode of Catfish that I watched someone pretended to be someone of the oppostie gener, befriended them for over 8 years, and the person who this was happening to held off her education and even sent money over to this person. Only to discover that it was all based off a bet. HOW CRUEL IS THAT!? I definitely shed tears watching that. No one deserves to be treated like that.

With opinions pushed aside, the show Dr. Phil is a prime example of just how cruel these ‘catfish’ can be. I’ve seen bits of an episode and people would send thousands, heck, even millions over to these people who they think they love (but really don’t know at all.) Now, I’m a very stubborn person, ask anyone that knows me. But to not realise that this ‘catfish’ is using you is far from being stubborn – that’s more delusion or possibly denial (IMHO.)

So, Alex, how do I avoid all of this? My answer: you can never 100% guarantee that it won’t happen. I’m sure your Mom has always told you “once something has been put online, it’s up there forever.” Well, as much as you sighed and rolled your eyes every time your Mom said it, it is true. Once you put something up on the internet, it’s pretty much there forever. So be careful when posting personal information, banking information, or any other pertinent information – others can easily steal your identification.

So, to help you with online dating, here are some tips to help setting up (or editing) your profile:

Now, as I said in the disclaimer in the beginning, I’m without a boyfriend. Which, quite honestly, doesn’t phase me. Why? Because I not only like being able to have my bed to myself, but I also like being independent. I like being able to do things without having someone else step in and do them for me (but that’s not to say I don’t like being treated every once in awhile.) However, the single life has taught me to love myself. Because, as my Mom always said to me, “you can’t love anyone else if you can’t love yourself.” Boy was she ever right. I have learnt so much about myself being single and I have been able to try new things and figure out who I really am. I just overall have been extremely happy.

So, my message to you boys and girls, before you consider dating in any way, make sure that you’re doing it for all the reasons. Not because you’re lonely and are trying to fill a void, or simply because “all my friends have a boyfriend and I don’t.” Well, love, it’ll happen – love yourself first. 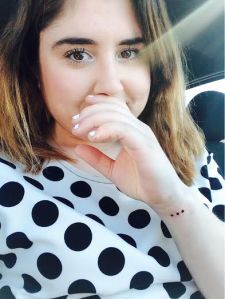