It’s been a rough week for me. With bad news and bad days consuming me, it felt like all I was doing was fighting to stay strong through it all. Thankfully I’ve got my family and friends, who I refer to as the most beautiful bunch of souls that I’m very lucky to have.

In my personal opinion, having a solid group of people surrounding you during those difficult times is key. They’re there to talk, listen, and comfort you in your time of need. Although, there are times when they may not necessarily understand, the most important thing they can do is listen and be present.

I’m not sure if I’ve mentioned this before, but before I was diagnosed with bi-polar disorder, I was actually being treated for depression. I was treated for depression for almost 2 years before being diagnosed with bi-polar disorder. During the time of treatment for depression, there were many lows that I had experienced. I can recall one time when I thought I had reached rock bottom. And during this period, I was being told that I didn’t have any issues and that I didn’t need to take medication because I was fine. Meanwhile I would have thoughts of self-harm (and even have times where I would act upon them).  But I knew in my mind that what I was feeling, thinking, and doing wasn’t normal (for lack of a better word) – I knew something wasn’t right. I could feel it.

Then I had the complete opposite reaction with other family memebers. They would attend my appointments with me, they would make sure I was feeling okay and check up on me, and they would educate themselves on what my diagnosis actually is. What helped with the latter part of that is the fact that I share when I’m going through a depressive or manic episode. That way they know what they’re looking for (symptom wise) and to know that I may need a little extra love and support during that time.

For me, I used to have an issue being told that I was okay and that I didn’t need to be taking medication. It wasn’t until I realized that some people are genuinely stuck in their own ways – and I don’t mean that in a mean or rude way. I mean that some people are not as open minded and accepting of certain things and that’s okay, that’s just who they are. There is nothing you can do to convince them otherwise. And I truly believe that going to therapy helped me through that. I have reached a point now where, if anyone tells me they don’t believe I should be taking medication or such, I tell them this: “I respect your opinion. I may not agree with it, but I respect. I know what is good for me and my body and I know what works best for me. I ask that you respect me and my opinion and choice(s).”

One thing you may or may not know about me is that I am very close with my younger sister. She too has been diagnosed with a mental illness. I’m very over-protective of her and I remind her of the above quote all the time. It’s important to me that she knows that she does what she feels is right for her and her body. And to not let anyone else’s opinion get in the way of living the lifestyle that works best for her.

My advice to those who have a family member, or even a friend, who has been diagnosed with a mental illness is this: educate yourself. Education, to me, is a huge factor in understanding why someone may feel a certain way or why their behaviour may appear different. Understanding the mechanism behind their mental illness and the common symptoms will explain almost 95% of why they are feeling/behaving the way they are.

So, if there’s anyone who is unsure of what they should do when a friend or family member is diagnosed, educate yourself and be there for them when they need you no matter what. 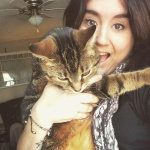